Citizen of the United States, 1963 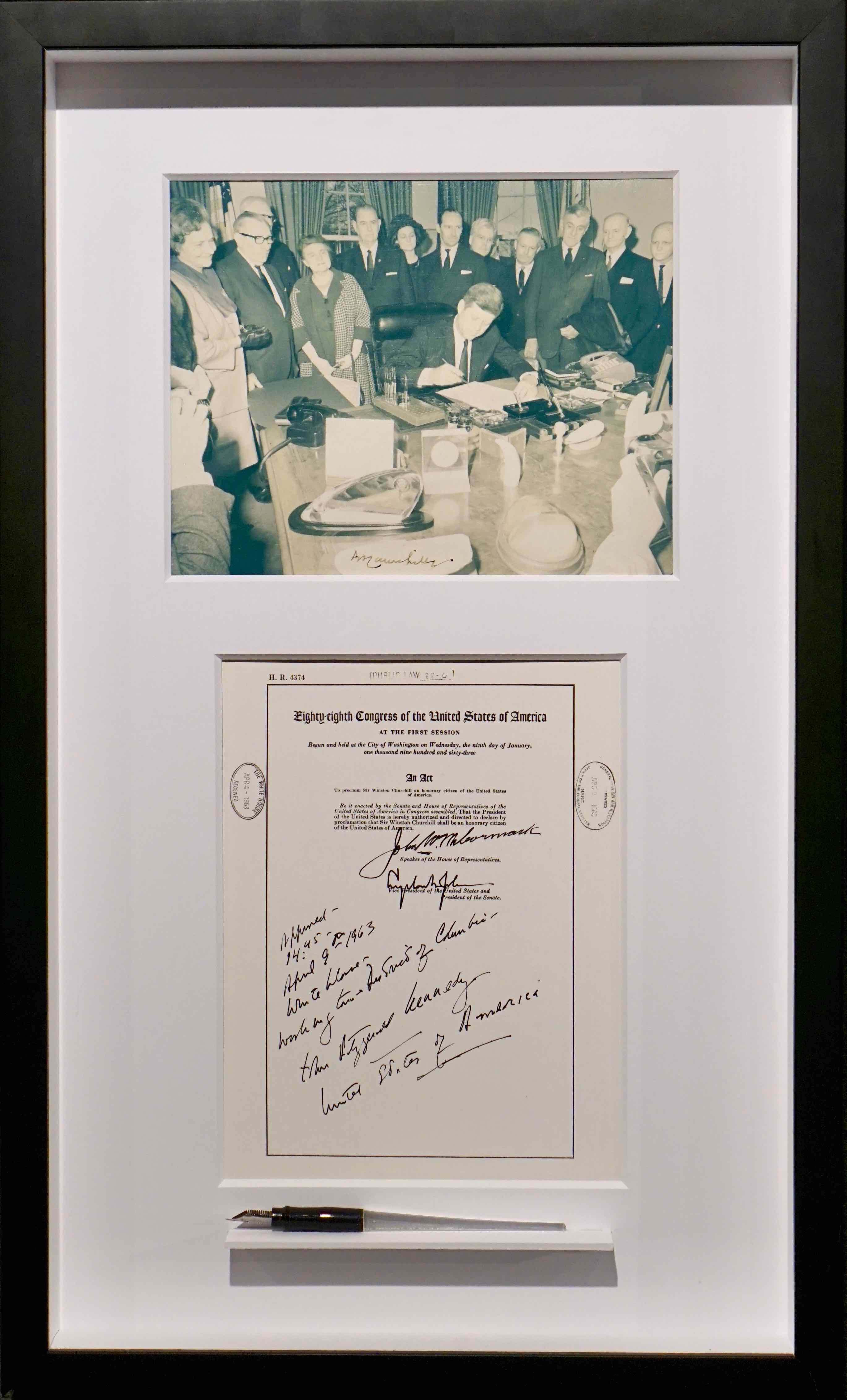 On April 9, 1963 at 2:45 pm, President John F. Kennedy used this pen to sign House Resolution 4374 into law, allowing him to proclaim Winston Churchill the first honorary citizen of the United States.*

Cleveland department store heiress, Washington socialite, and journalist Kay Halle played a key role in Churchill’s honorary citizenship. She first proposed the idea during Eisenhower's administration. Due to the British-American tensions during the Suez Crisis, however, Churchill dismissed the idea as he felt it would be misconstrued. Halle was not deterred and continued to pursue the idea, calling upon her Washington connections and utilizing her position as a journalist to launch a media campaign.

In August 1962, Senator Stephen M. Young of Ohio spoke about the Churchill as "the hero of two nations" and introduced the first bill proposing honorary citizenship. By this time the relations between the US and Great Britain had improved and Kennedy, who greatly admired Churchill, was in office. When Halle visited Churchill that same month, she "was given to understand by people close to him that the proposed American citizenship was now a central interest of his life" according to a CBS television broadcast.

It was not until the 1963 spring congressional session that one of the honorary citizenship bills was passed, Pennsylvania Representative Francis E. Walter’s H.R. 4374. Due to his failing health, Churchill was unable to attend Kennedy's singing to receive his honorary citizenship in person but his son Randolph came in his place and expressed Churchill's "solemn and heartfelt thanks."

*Although Lafayette (1757-1834) was granted a natural-born citizenship by the Maryland General Assembly during his lifetime, Churchill was the first person to be awarded an honorary citizenship.

WHEREAS Sir Winston Churchill, a son of America though a subject of Britain, has been throughout his life a firm and steadfast friend of the American people and the American nation; and

WHEREAS he has freely offered his hand and his faith in days of adversity as well as triumph; and

WHEREAS his bravery, charity and valour, both in war and in peace, have been a flame of inspiration in freedom's darkest hour; and

WHEREAS his life has shown that no adversary can overcome, and no feat can deter, free men in the defence of their freedom; and

WHEREAS he has by his art as an historian and his judgment as a statesman made the past the servant of the future;

IN WITNESS WHEREOF, I have hereunto set my hand and caused the Seal of the United States of America to be affixed.

DONE at the City of Washington this ninth day of April, in the year of our Lord nineteen hundred and sixty-three, and of the Independence of the United States of America the one hundred and eighty-seventh.

We meet to honour a man whose honour requires no meeting - for he is the most honoured and honourable man to walk the stage of human history in the time in which we live. Whenever and wherever tyranny threatened, he has always championed liberty. Facing firmly toward the future, he has never forgotten the past. Serving six monarchs of his native Great Britain, he has served all men's freedom and dignity. In the dark days and darker nights when Britain stood alone - and most men save Englishmen despaired of England's life - he mobilised the English language and sent it into battle. The incandescent quality of his words illuminated the courage of his countrymen. Given unlimited powers by his citizens, he was ever vigilant to protect their rights. Indifferent himself to danger, he wept over the sorrows of others. A child of the House of Commons, he became in time its father. Accustomed to the hardships of battle, he has no distaste for pleasure. Now his stately Ship of Life, having weathered the severest storms of a troubled century, is anchored in tranquil waters, proof that courage and faith and the zest for freedom are truly indestructible. The record of his triumphant passage will inspire free hearts for all time.

By adding his name to our rolls, we mean to honour him - but his acceptance honours us far more. For no statement or proclamation can enrich his name -- the name Sir Winston Churchill is already legend.

Sir Winston's reply read by his son Randolph on the 9th April at The White House.

Mr. President, I have been informed by Mr. David Bruce that it is your intention to sign a Bill conferring upon me Honorary Citizenship of the United States. I have received many kindnesses from the United States of America, but the honour which you now accord me is without parallel. I accept it with deep gratitude and affection. I am also most sensible of the warm-hearted action of the individual States who accorded me the great compliment of their own honorary citizenships as a prelude to this Act of Congress. It is a remarkable comment on our affairs that the former Prime Minister of a great sovereign state should thus be received as an honorary citizen of another. I say "great sovereign state" with design and emphasis, for I reject the view that Britain and the Commonwealth should now be relegated to a tame and minor role in the world. Our past is the key to our future, which I firmly trust and believe will be no less fertile and glorious.

Let no man underrate our energies, our potentialities and our abiding power for good.

I am, as you know, half American by blood, and the story of my association with that mighty and benevolent nation goes back nearly ninety years to the day of my Father's marriage. In this century of storm and tragedy I contemplate with high satisfaction the constant factor of the interwoven and upward progress of our peoples. Our comradeship and our brotherhood in war were unexampled. We stood together, and because of that fact the free world now stands. Nor has our partnership any exclusive nature: the Atlantic community is a dream that can well be fulfilled to the detriment of none and to the enduring benefit and honour of the great democracies.

Mr President, your action illuminates the theme of unity of the English-speaking peoples, to which I have devoted a large part of my life. I would ask you to accept yourself, and to convey to both Houses of Congress, and through them to the American people, my solemn and heartfelt thanks for this unique distinction,which will always be proudly remembered by my descendants.