The Phoenix Continues to Rise

From Foundation to the Great Fire

The church was founded in the late 11th or early 12th century within what is now the historic City of London. As a medieval parish church, it was responsible for the religious well-being of persons within its geographical area. Sometime before the 16th century it received an endowment from the "late Alderman Bury of London," acknowledged in the church's name.

The parish and church grew with the City of London and shared all of its struggles. It survived both the English Reformation and Restoration, becoming one of the prominent Puritan parishes of the 17th century. Even civil war and plague did not stop the parish's development.

But what social change and upheaval could not stop, fire did. On 2 September 1666 the Great Fire of London began, burning for five days. When it finally burned out, the city of London north of the Thames - including the entire parish of St. Mary the Virgin, Aldermanbury - lay in ruins.

This was the prelude to the first rebirth of the church.

The Phoenix of Aldermanbury

Wren Rebuilds the Church
Like the mythical Phoenix - the bird reborn from fire to live again - St. Mary the Virgin, Aldermanbury emerged from the ashes of London.

With so much of London in ruin after the Great Fire, King Charles II commissioned Sir Christopher Wren to rebuild 52 new churches all over London. St. Mary the Virgin, Aldermanbury was the ninth to be rebuilt by Wren.

With approval for rebuilding granted in 1670, work began in 1672 with the removal of 1,068 cubic yards of rubble. The only medieval stones which were incorporated into the new church were the foundation and the stairs that lead to the crypt. The church was rebuilt on part of the old foundation with as much original stone as could be salvaged - saving both time and money. By 1677 the work was essentially complete; the cupola was added to the tower in 1679.

No original drawings remain; drawings were typically made by Wren's assistants as guidance for the workers and would be in poor shape when the builders finished with them. But, while Wren may not have personally drawn all the plans for St. Mary's, he undoubtedly was the guiding vision behind the design.

The Blitz
While some changes, such as adding stained glass windows, were made to the 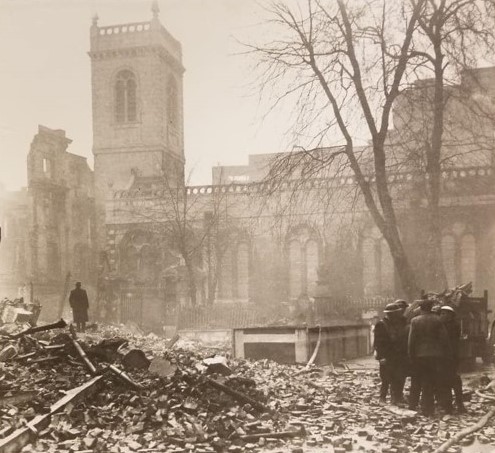 church over the centuries, St. Mary the Virgin, Aldermanbury stood proudly in London until 1940. On 29 December, 1940, during a German air raid, St. Mary the Virgin, Aldermanbury fell victim of incendiary bombs dropped by a German Luftwaffe and proceeded to burn again. By the next morning all that was left were the outer walls, columns, and the bell tower.

The church remained in ruins until 1965.

"I am honoured... The removal of a ruined Christopher Wren Church, largely destroyed by enemy action in London in 1941 [sic], and its reconstruction and re-dedication at Fulton, is an imaginative concept..."

Westminster College's Bold Idea
In 1961, College President Dr. Robert L.D. Davidson met with College friends and members of the St. Louis Chapter of the English-Speaking Union to discuss a memorial to Winston Churchill. A recent Life magazine feature on war-ravaged Wren churches slated for demolition sparked the suggestion of importing one to serve as both a memorial and the college chapel. With the help of the college architect, Emmett Layton, his wife, Ruth Layton, and consulting architect, Patrick Horsbrugh, the suggestion turned into a plan. Further investigation proved St. Mary the Virgin, Aldermanbury to be the clear choice, its size perfect for the campus.

But this extraordinary architectural reconstruction plan was not without detractors. A British newspaper called it, "...the last word in sentimental extravagance... Besides it is no secret that... the City of London is glad to get rid of the smoke-charred ruins that have become an eyesore." An architecture student opined, "Hauling all of this rubble to America seems frightfully expensive."

The project's champions, however, persevered as there were plenty of American and British citizens who wanted to see the project succeed. It took four years to secure permissions from the British Church and State, and to raise the necessary $1.5 million (more than $12 million today) to make the project a reality.

A Moving Experience
In 1965 the removal process began. Workers carefully cleaned, removed, and labeled each of the 7,000 stones, noting their location in the church. More than 650 tons of blocks were shipped by boat to Virginia (The U.S. Shipping Board moved them as ship's ballast at no charge). From there, they traveled by rail. In the moving process, the carefully ordered stones became scrambled. Builders in Fulton faced a jigsaw puzzle that spread over an acre. It took them took an entire day to find the first two stones to lay.

A Church Restored
The foundation stone was laid in October 1966, 300 years after the Great Fire of London. While reconstructing St. Mary's, Marshall Sisson, who was the architect overseeing deconstruction and reconstruction, and Frederick Sternberg, who was consulting architect, used photographs to construct the exterior of the church exactly as Wren designed it in 1672. The only medieval stones that were brought over were the stairs that lead to the crypt, which now lead from the organ loft to the bell tower. Reconstruction was complicated by the fact that the original foundation upon which Wren built was not square, requiring continual adjustments in fitting the stone. However, by May of 1966, the last stone was placed and the reconstruction of the interior began.

Meticulously re-creating the church's interior required another two years and a multinational effort. Arthur Ayres was an English woodcarver who worked from pre-war photographs, created carvings for the original pulpit, baptismal font, and balcony. Blenko Glass, an American firm, manufactured the glass for the windows, just as they would have been made in the 17th century, and a Dutch firm cast five new bronze bells for the tower.

Noel Mander, the fire warden who watched St. Mary's burn in 1940, built the organ and helped assure authenticity of the interior details. There are only two departures from the Wren design: an organ gallery was originally in the west wall where vestries now stand, and a window in the tower to illuminate the stairway.

St. Mary the Virgin, Aldermanbury, like the legendary phoenix, had risen once again from the ashes.