The Berlin Wall: A Historical Artifact

Torrential downpours filled the preceding days, but this August day is clear and hot. There is nothing disturbing about the sight of cranes and concrete slabs quietly resting near the edge of the city. As darkness falls, it seems like a thousand other evenings.

At midnight, Saturday, August 13, 1961, East German soldiers begin sealing off the city. First, they string miles of jagged barbed wire (bought inconspicuously from West Berlin firms). This wire will soon be replaced by a much more ominous and lasting presence—the Berlin Wall.

The Berlin Wall curls through Europe's third largest city. The Wall is a motionless concrete snake raising ten to thirteen feet high. It winds and bends through Berlin, crossing streets and backyards. If straightened, the Berlin Wall would measure nearly one hundred miles long.

Behind the Wall, a hundred yards into Communist East Germany, is another concrete barrier almost as formidable—the leveled area between—flat, desolate and dangerous. This is a "no-man's land," which is constantly patrolled by armed guards and unrestrained dogs, covered by automatically triggered machine guns, and in some places sown with land mines. Some 285 elevated watch towers thrust up ominously above "no man's land," punctuating this scene of dread.

The Eastern side of the Wall is especially smooth and clean. The rounded top edge is difficult to grasp. Weak spots are constantly being improved, upgraded, reinforced, and rebuilt. The entire edifice is meticously maintained. The creation of the Berlin Wall comes about because of a panicked country desperate to retain its citizens who are fleeing at an astonishing rate. Even after the erection of the Wall, a few still manage to slip by, going over the five-foot thick wall, under it, around it, and a few even crashed through it.

Not until November 9, 1989, did the people of both East and West Berlin together dance along the top of the Berlin Wall. Reunited families and friends sing and embrace, cheering, "The Wall is gone!" People suddenly feel freedom along this deep, shivering scar from the Cold War.

Berliners from both sides fill the streets, like eager kids at a carnival, glimpsing wide-eyed at their neighbors' foreign land. They drink champagne. They rejoice through the night. They heal old wounds.

With hammers, chisels, fingernails and an overwhelming sense of hope, Germans from East and West begin tearing down the Wall, creating new openings. "The Wall is Gone!" From this rubble rises a new symbol for tomorrow, an icon for future generations, the Berlin Wall...dismantled.

One year after the November 9, 1989, fall of the Berlin Wall, artist Edwina Sandys, granddaughter of Winston Churchill, introduced her Breakthrough sculpture to a crowd of 7,000 people gathered on the campus of Westminster College. The 11-foot-high by 32-foot-long structure, perhaps the most important monument to be constructed on American soil since the Vietnam War Memorial, began as a dream in the mind of its sculptor.

With the support of Westminster College and patron Richard Mahoney, Sandys and her husband, Richard Kaplan, met with of officials in East Berlin in February 1990. Upon arrival in Berlin, the couple realized their plans to secure large portions of the wall would be costly, as 4-foot-wide sections were selling at a cost of $60,000 to $200,000. This obstacle, however, was solved when officials, impressed by the idea of a Berlin Wall monument being erected near the site of Churchill's 1946 "Iron Curtain" speech, allowed Sandys to choose eight sections as a gift to the College. Sandys chose her sections from an area near the Brandenburg Gate, frequented by artists, because of the dramatic color of the graffiti. The repeated use of the word "Unwahr," within the sections, which in German means "lies" or "untruths" also appealed to her.

I had always wanted to make a sculpture for the Churchill Memorial at Westminster, and this seemed the perfect moment to do something. Friends in Berlin had come back with tiny little pieces of wall, and I thought, "Wouldn't it be great to make a sculpture." I thought I'd better go straight [to Berlin] while there was some wall left.

On November 9, 1990, after a nine-month effort, the Breakthrough sculpture stood appropriately in the foreground of the National Churchill Museum. Former President Ronald Reagan, Senator John Ashcroft and German Minister Plenipotentiary Fritjof von Nordenskjoeld, Sandys introduced her sculpture to the assembled crowd. Forty-four years after her grandfather warned of an "iron curtain," the wide open doors of "Breakthrough" provided a concrete image of the newly realized freedom in Eastern Europe. The ceremonies concluded with a benediction by the Rev. Dr. William B. Huntley Jr., college chaplain. 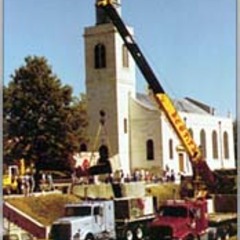 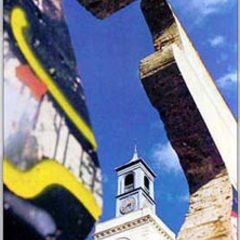 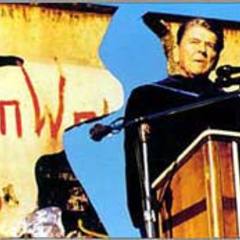 History is a look backward, a reconciliation of times and lives gone by. We face the glowing view before us. It is a vast an unknown landscape. It is the stuff of dreams. Blue-sky sails just out of view. Pass through the wall—experience your own "breakthrough."