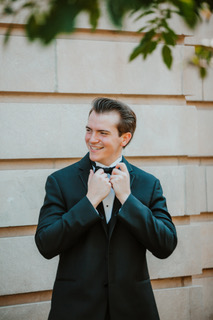 The Central Missouri Chapter of the American Guild of Organists and America's National Churchill Museum present Aidan Hill in concert in celebration of the Chapter's 90th anniversary, the AGO's "Year of the Young Organist," and the recent installation of Donald P. Lofe, Jr., as the 23rd President of Westminster College.

Aidan Hill is a junior undergraduate at the University of Kansas studying organ with Dr. James Higdon. Aidan is from Kingman, Kansas and studied piano from an early age with his hometown piano teacher, Joan Robinson, and began organ lessons at the age of eleven with Carole Pracht, organist at St. Mary's Cathedral in Wichita. He has previously participated in and been awarded prizes for competitions in organ, of which recently include Second Prize in the 2021 AGO Regional Competition for Young Organists, and the Diploma Prize as a finalist in the XII Mikael Tariverdiev International Organ Competition in Kaliningrad, Russia. Alongside his performance, Aidan is an active composer, whose recent work includes his Missa Sancta Familia for organ and choir, which was first premiered at the Nuptial Mass for he and his wife, Megan. He regularly showcases his work in performance, composition, and practice via his social media presence on his Youtube and Instagram pages.