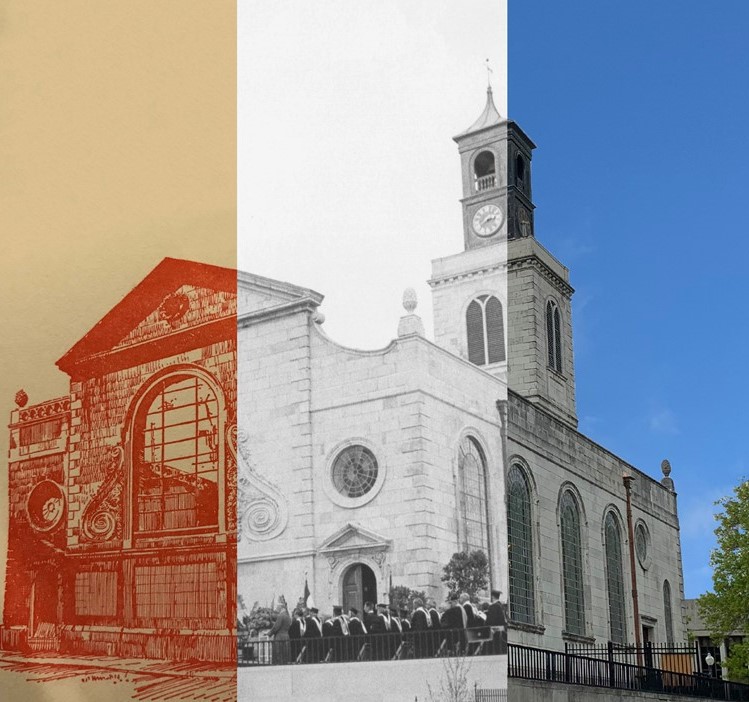 FULTON, MO, May 5, 2019 – The night started with a timely letter and closed with a message from the past.

“I cannot tell you how delighted I am once again to help you celebrate the very special Church of St. Mary the Virgin, Aldermanbury, rebuilt by Sir Christopher Wren in the 17th Century, and relocated from London and rebuilt again in Fulton, Missouri, in the 20th Century to serve as the most remarkable and highly appropriate memorial to Sir Winston Churchill’s Sinews of Peace address.”

The letter ended with “I should like to thank you all most warmly for your continuing efforts to protect, preserve, and cherish it.” It was simply signed “Charles.” 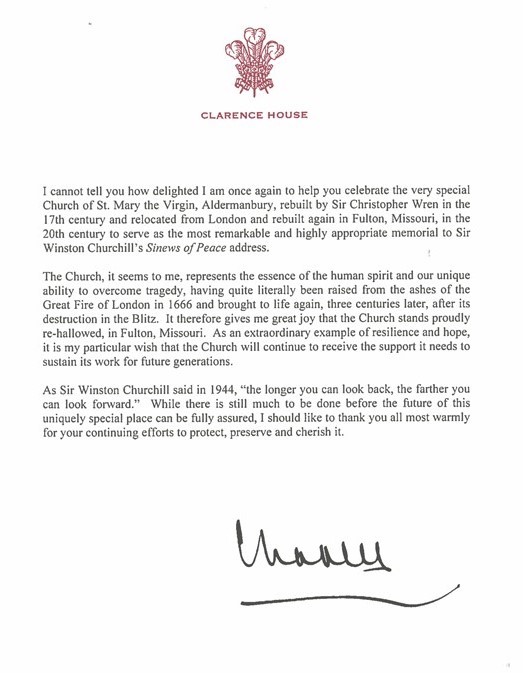 The letter from the Prince of Wales, heir to the British throne as the eldest child of Queen Elizabeth II, was read aloud by Her Majesty’s British Consul General John Saville during a gala Saturday night in the “Historic Gymnasium” on the campus of Westminster College, where in March 1946 Churchill gave his speech, which is often called the Iron Curtain speech.

1,500 people descended across the Westminster College campus including four members of the Churchill family, and other VIPs from England and across the United States. They gathered to commemorate and celebrate the 50th anniversary of the re-hallowing of the historic and legendary Church of St. Mary the Virgin, Aldermanbury, and the opening of America’s National Churchill Museum.

The gala dinner featured a keynote by David M. Rubenstein, co-founder and co-executive chairman of The Carlyle Group in Washington D.C., philanthropist, and host of Bloomberg TV’s Peer-to-Peer Conversations.

Rubenstein’s speech capped a weekend of new exhibitions, the Enid and R. Crosby Kemper Lecture by acclaimed biographer and Churchill Fellow Andrew Roberts, and a lively presentation by Churchill granddaughter, artist Edwina Sandys, of New York City, who invited hundreds in attendance to walk through her Breakthrough sculpture, made from a 32-foot-long stretch of the Berlin Wall, the embodiment of the Cold War initiated by her grandfather’s visionary speech at Westminster College in March 1946.

The afternoon began with the Enid and R. Crosby Kemper Lecture by Churchill Fellow, author and historian Andrew Roberts. The day also included a colorful parade attended by thousands, who delighted at the marching bands, vintage military vehicles, student artists, the fly-over of a B-25 WWII airplane, and a motorcade of Churchill family members that included Clementine and Winston Churchill granddaughters Edwina Sandys and Emma Soames and great-grandsons Jack Churchill and Duncan Sandys. St. Louisans Baxter Watson, who, as a Westminster student, escorted Churchill and Truman into the Historic Gymnasium, and Earle Harbison, Jr., who, as a college student, was present when Churchill delivered his speech 73 years ago, helped commemorate and celebrate.

Prince Charles’ letter focused on St. Mary the Virgin, Aldermanbury, built around 1181 AD, and gutted by the Great Fire of London in 1666. It was rebuilt in 1672 by Royal Architect Sir Christopher Wren, who also rebuilt dozens of other churches damaged in the fire. Aldermanbury continued serving its London parish until December 29, 1940, when the German Luftwaffe bombed London at the start of World War II, before the U.S. entered the war.

The fire-gutted stone church, which like many London buildings, sat in ruins for two decades after the war ended. It was acquired by the college’s Board of Trustees in the early 1960s, was carefully dismantled – all 7,000 stones, and they were shipped, railed, and trucked to Fulton, where the church was rebuilt according to Wren’s original design atop the new Churchill museum.

“The Church, it seems to me, represents the essence of the human spirit and our unique ability to overcome tragedy,” he wrote. “It therefore gives me great joy that the Church stands proudly re-hallowed in Fulton, Missouri. As an extraordinary example of resilience and hope, it is my particular wish that the Church will continue to receive the support it needs to sustain its work for future generations,” he wrote.

In his keynote, Rubenstein, who has arranged for such documents as The Magna Carta, the Declaration of Independence, the Emancipation Proclamation, and other rare documents to be on display in Washington D.C. and elsewhere in the United States, said the federal government is dysfunctional because Congress cannot work together to solve the country’s internal problems.

“External matters such as Brexit, terrorism, trade with China, and other issues are not our greatest challenges,” he said. “America’s greatest risks come from our own internal problems.”

He urged attendees, as individuals, to tackle at least one of those problems. In doing so, he echoed the words of President John F. Kennedy, the first honorary chair of the National Churchill Museum in Fulton, to “Ask not what your country can do for you. Ask what you can do for your country.”

On Sunday, 12 new members were inducted into the Association of Churchill Fellows during solemn ceremonies inside the Church of St. Mary the Virgin, Aldermanbury. They are: 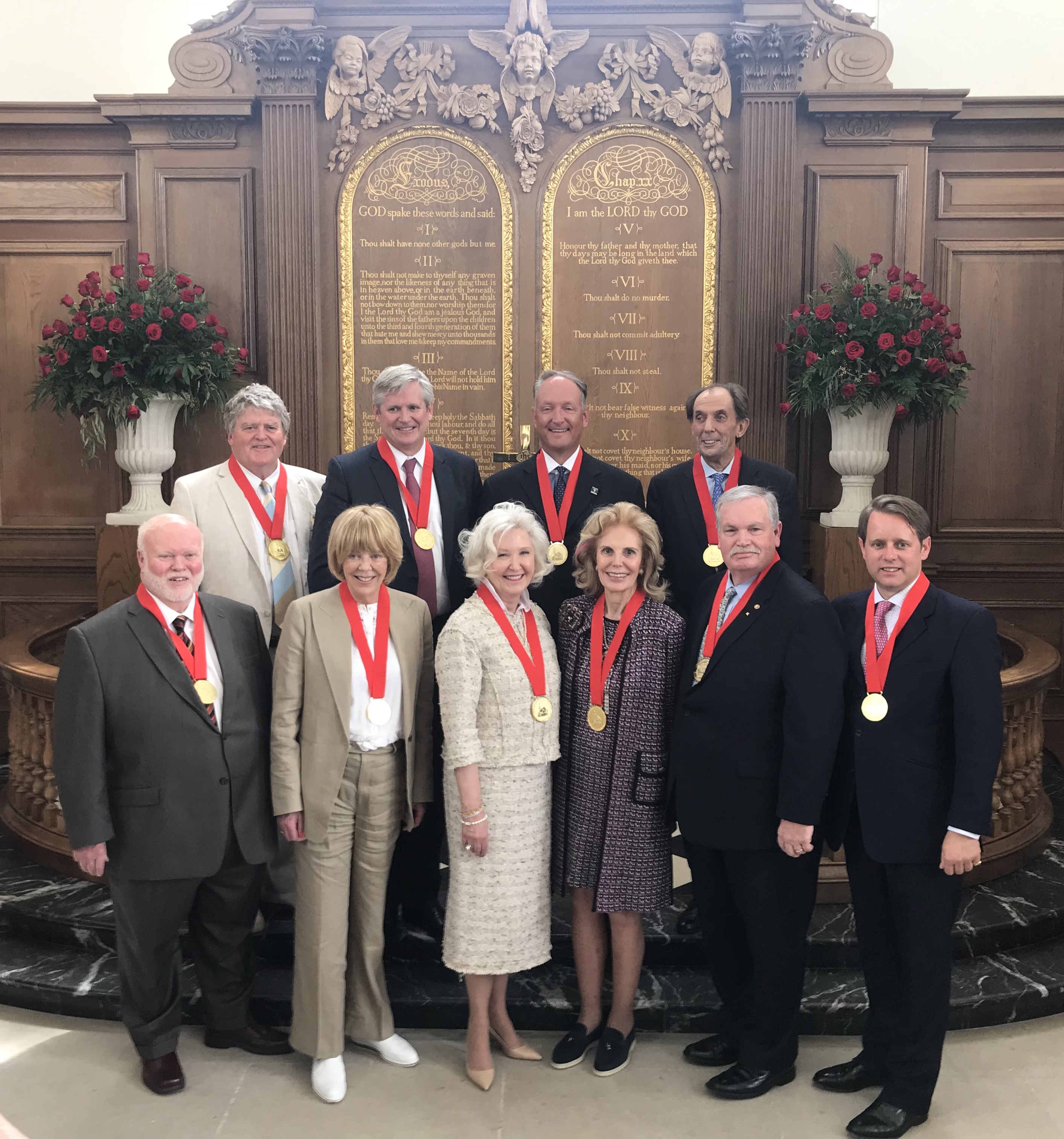