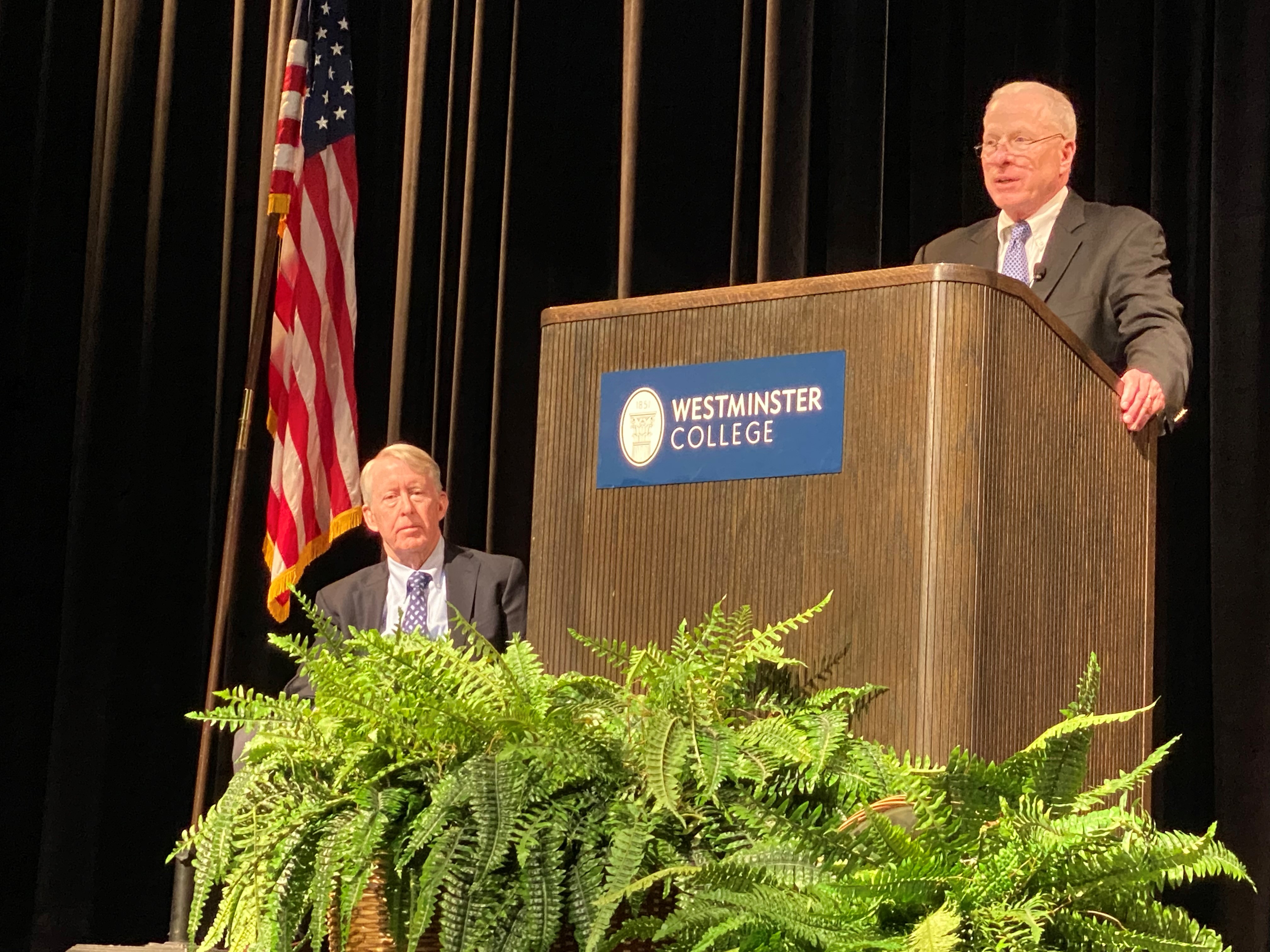 Removal of “Interim” label recognizes Lofe’s accomplishments in office since 2020
and provides stability and continuity as the College continues its transformation.

The Board of Trustees of Westminster College has unanimously appointed
Donald P. Lofe, Jr., to be the historic college’s 23rd president, it was announced today.

The Board cited the major progress the 170-year-old liberal arts college has made under Lofe’s leadership as Interim President, even during an exceptionally challenging year and in the midst of the pandemic.

The election of Lofe, who was officially appointed Interim President and Chief Transformation Officer last year upon the retirement of former President Fletcher Lamkin, PhD, will take effect July 1, 2021, the beginning of the College’s fiscal year.

The appointment will remove the “Interim” label from Lofe’s present title and extends his initial term by at least two additional years, through June 30, 2024.

Lofe’s appointment will provide continuity of leadership and enable Westminster to continue a program of transformation that extends to many aspects of the College’s community well into the future.

In addition to his appointment as President, Lofe will maintain his title of Chief Transformation Officer.

He will also continue his extended leave of absence as Board Chair and will serve on the Board as an ex-officio member, consistent with historic practice for the role of the President.

“Don’s appointment reflects the Board’s confidence in the job he’s done as Interim President and in his vision for the College’s future,” said Board Chair Jim Morton, who became Chair last year when Lofe, who served as Board Chair since 2019 and as a Board member for nine years, became Interim President. “From the outset, we made it clear that this appointment would be no ordinary ‘caretaker’ interim role.
Don fully accepted the responsibility of overseeing Westminster College, even though the institution was in the midst of the pandemic, which presented unprecedented challenges for our college and every academic institution in the country.”

Morton added that as Chief Transformation Officer, Lofe has begun carrying out a bold plan for Westminster’s future.

“Don has exceeded our expectations, and we quickly concluded that it made sense to give him the full authority of the presidency and our support to continue carrying out that plan in the coming years,” he said.

Lofe credits the Westminster community with much of the institution’s progress this year. “I’m honored and humbled by the confidence the College and the Board have placed in me,” said Lofe.

“The progress we have made during this challenging year is the result of everyone working together in so many ways. We are building an exciting and sustainable future for Westminster, and I invite all of our students, faculty, staff, and alumni to join with us to make this a reality. With the entire college community, my wife, Lorraine, and I very much look forward to this next phase of our Westminster
journey together.”

Lofe has had a distinguished career, both at Westminster and in his professional life. In addition to being a Trustee and Board Chair, he is a 1979 graduate of Westminster, where he became a two-time NAIA Indoor Track and Field All-American after being a standout scholar-athlete at St. Louis’s Parkway North Senior High.

He earned bachelor’s degrees in Accounting and Political Science before attending The University of Chicago School of Business, where he earned an MBA with concentrations in Finance and Business Policy. Most recently, Lofe was a Partner and the Chief Risk Officer for Global Business Services – Mortgage and Lending Solutions for the IBM Corporation.

Throughout his career, Lofe has held senior executive positions at public and non-public entities, including those in insurance, community lending, and other financial and mortgage-related service industries, both domestically and internationally. He was also a Partner with PricewaterhouseCoopers LLP, specializing in financial services and private and public higher-education clientele.

In 2010, Westminster recognized Lofe with its Lifetime Alumni Achievement Award. He is a CPA, a CGMA (Active Status), and COSO Certified by the AICPA. Lofe also was named by Treasury and Risk as one of the 100 Most Influential People in Finance.

Morton and the Board credited Lofe with quickly developing a “First 100 Days” plan, in conjunction with his Cabinet members, that evaluated campus-wide policies and further established provisions to safeguard students, faculty, and staff from the coronavirus. Throughout the past year, new operating initiatives and educational protocols were rapidly implemented using a hybrid format, including both virtual and/or in-person classes.

David Roebuck, Vice President for Academic Affairs and Dean of Faculty, added that Lofe has worked well with faculty, making open communication a priority throughout the 2020-2021 Academic Year. “Don has an open-door policy and promotes an environment of transparency. He has been genuinely interested in listening to faculty and supporting their efforts,” Roebuck said.

Timothy Riley, Sandra L. and Monroe E. Trout Director and Chief Curator of America's National Churchill Museum adds, "President Lofe has long been an ex-officio member of the Board of Governors of the Association of Churchill Fellows and also serves on the Board of Directors of the International Churchill Society (U.S.), and organization of which Westminster College is a founding partner. He recognizes and understands the importance of the Churchill legacy and is committed to making that legacy relevant to, and for, current and future generations. We are pleased to have him at the helm of our historic college."

Morton said that communication is important to Lofe, who spent a great deal of time during his interim term listening to the many constituencies of the College in order to seek their input. He conducted Student Town Hall meetings, facilitated online sessions with the parents of current students, and held “listening sessions” with students, faculty, staff, alumni, and donors to better understand the College’s present state and reputation as well as its future needs.

Building on a past task force initiative at Westminster, Lofe resurrected and reconstituted the task force in the form of the Diversity, Equity, and Inclusion Steering Committee to improve and enhance opportunities for all involved with the College community. The initiative focuses on fostering a genuinely diverse and inclusionary community with regard to race, ethnicity, gender, sexual orientation, and
socioeconomic factors, to name just a few groups. “The College is thriving under Don’s leadership,” Morton said. “Freshman enrollment is up more than 25
percent for the current academic year, and freshman applications for Fall 2021 have increased an amazing 88 percent.”

Morton also credited Lofe with developing a strong strategic, capital, and financial plan for the College, which presently is well under way.

“He’s making improvements that will enable Westminster College to continue its transformation, increase its enrollment, strengthen its curriculum, and enhance its operations, among other initiatives, all of which are creating a very bright future for Westminster,” Morton said.

Lofe will be officially installed as President during formal campus ceremonies, subject to COVID-19 requirements, this fall.

Lofe’s wife, Lorraine, is a native of St. Louis, MO, who graduated from Southeast Missouri State University in Cape Girardeau with a BS in Business Administration. She also is a CPA (Active Status).

The couple met in St. Louis and married in 1992. They have a set of grown twins.
Their daughter, Lauren, graduated with honors from the University of San Diego in 2019 and is Director of Marketing for a digital marketing startup in San Diego. Their son, Don III, graduated with merit last year from the U.S. Naval Academy and is attending flight school at the Naval Air Station in Pensacola, FL, to become a Naval Aviator.

About Westminster College: Founded in 1851 the site Winston Churchill’s “Iron Curtain” speech and home to America's National Churchill Museum, Westminster College in Fulton, MO, is ranked prestigiously by U.S. News & World Report as the only National Liberal Arts College in Missouri. The institution is in the top 15 percent for graduate earnings and boasts a 98 percent placement rate. Westminster also is a Forbes Best Value College. Westminster focuses on educating and inspiring students to find the power in their purpose in order to become the world leaders of tomorrow.