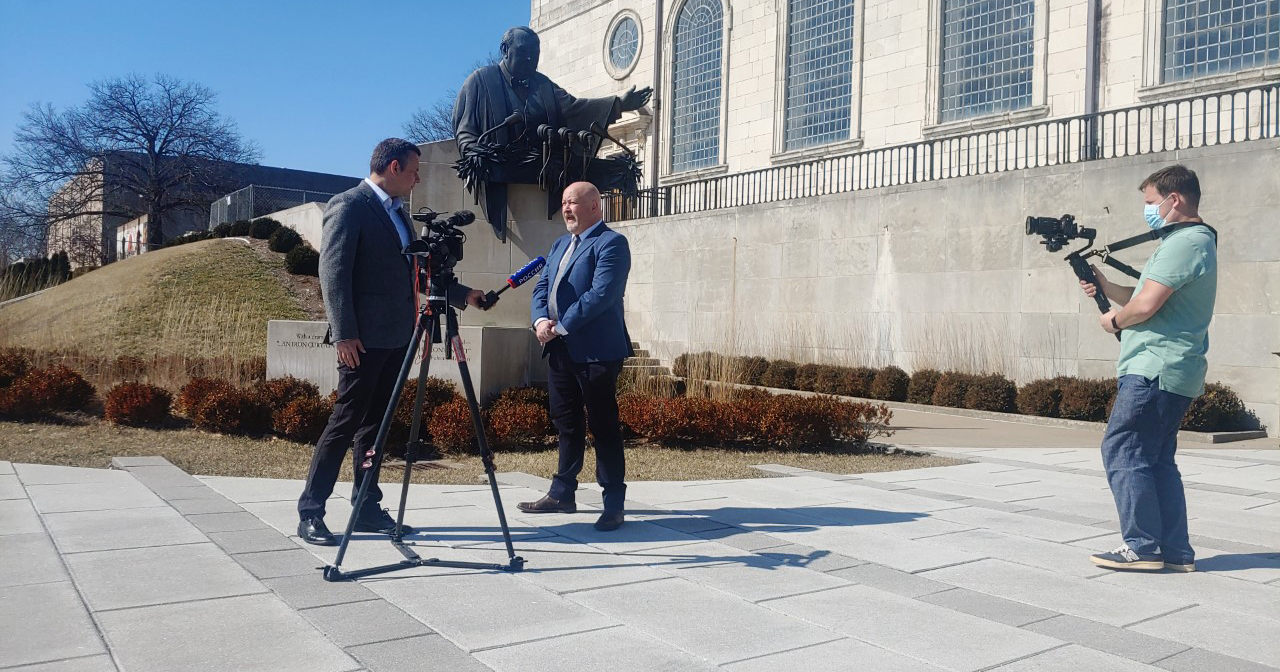 The second-largest television station in Russia arrived in Fulton, MO, from New York, NY, on Mar. 4, 2021, to film a 15-minute segment on the speech and Churchill’s historic visit to campus on Mar. 5, 1946.

The crew extensively filmed news shots of America’s National Churchill Museum, the Historic Gymnasium, and the Breakthrough sculpture, which Artist/Churchill’s granddaughter Edwina Sandys created out of eight sections of the Berlin Wall.

Former President Ronald Reagan dedicated the sculpture on Nov. 9, 1990, three years after standing in front of the Brandenburg Gate in Berlin and famously ordering Soviet President Mikhail Gorbachev to “tear down this wall.”

As fate would have it, on May 6, 1992, Gorbachev visited Westminster and delivered a speech in front of the 32-foot-long sculpture that at the time seemed to tie up loose international and political ends.

Privately, Bogdanov said the end of the Soviet Union brought personal struggles for many, including his family, which was forced to move back to Russia from Central Asia after the USSR collapsed.

During his visit, Bogdanov politely expressed a few other differing viewpoints while touring campus, which that day experienced unseasonably warm and sunny weather that contrasted sharply with the black-and-white photos, historic documents, and gravity of the subject examined at length during his visit.

Bogdanov emphasized that Churchill’s speech remains monumentally significant in Russia today. His news segment, which aired Sunday, Mar. 7, 2021, was broadcast to more than 82 million people and could be loosely compared to CBS Sunday Morning or NBC’s Meet the Press.

He added that Russian President Vladimir Putin would be watching.

Although Russia 1 news offices are located all over the world, their requests for interviews usually are turned down throughout the United States. Bogdanov indicated tensions between the two countries have increased in recent years and that most Americans fear he is a spy.

Look for the Russian translation “The Muscles of the World” and how the segment further characterizes Britain’s post-World War II “muscles” as “flabby” and in need of American might.

Alumnus Mikhail Orlov, ’96 ΒΘΠ, who grew up in Moscow and currently lives in Flower Mound, TX, says the differing views expressed throughout the segment could be useful in Westminster’s political science classes.

Orlov, who majored in Political Science and International Studies, said it was important that Westminster allowed the Russian journalists to visit campus.

He mused, “The question for the West, and Westminster students, boils down to this: Is there a different story that needs to be told? Is there a way for the U.S. and U.K. to regain their moral authority on the world’s stage, or is this a lost cause?”

Read this article on the Westminster College news site.