Sinews of PeacePower of Prose 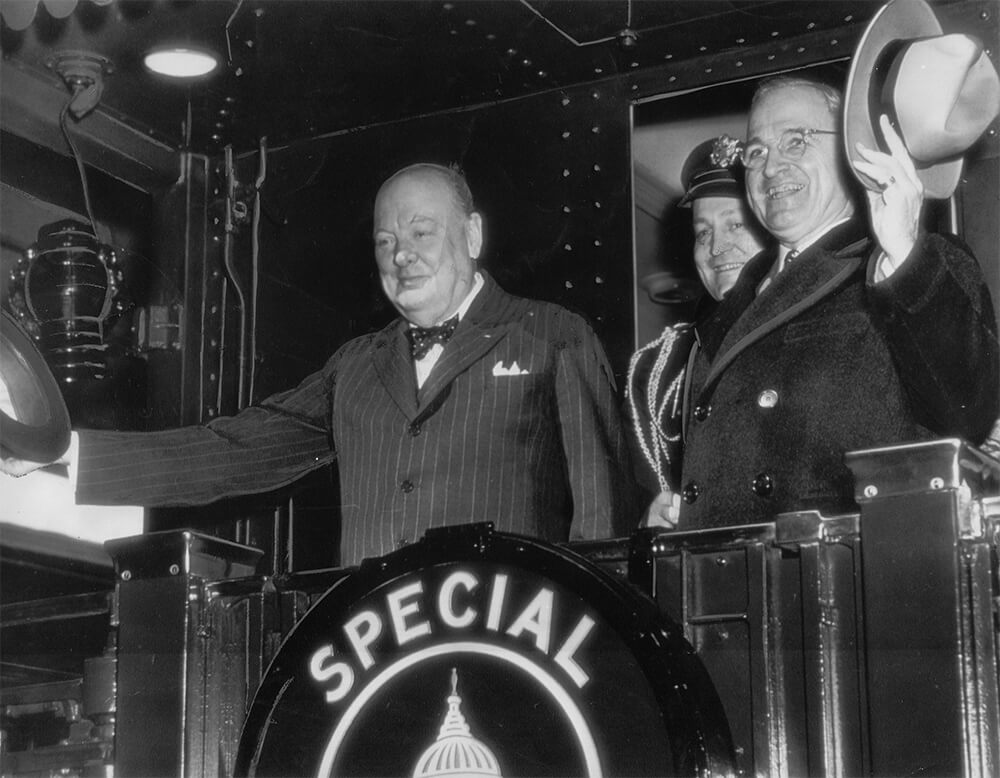 A World on Fire

“None can compute what has been called ‘the unestimated sum of human pain.”

In the years immediately preceding the Sinews of Peace speech, the world had been engulfed in conflict. The people of the world had just witnessed the most destructive war in the whole of human history, and by the time it had finally concluded in the flames of nuclear fire, eighty million men, women, and children’s lives had been cut short.

Winston Churchill had been the Prime Minister of Great Britain through most of this conflict, being in office from May 1940 to August 1945. Throughout his political career, Winston Churchill had held many different ministerial positions, and had been a prominent politician even in the years preceding World War I. However, he is perhaps best known for his leadership during World War II, which was characterized by a fierce resolve to never surrender, and to fight unto victory.

While the war had been brutal, few of the Allied nations had felt this brutality more than the Soviet Union. By the time victory in Europe had been achieved, 8.7 million Russian soldiers lay dead, with about as many civilians sharing the same fate as well. For the Soviet Union, the cost of victory had been staggering, and as the post-war world was set to be shaped, the nation’s leader, Joseph Stalin, resolved that never again would such a war come to Russian soil. As the nations of Eastern Europe were liberated by the Red Army, the Soviet Union set about installing governments friendly to Moscow in each of them, regardless of what the people of these nations wished. Only Czechoslovakia would vote to install a communist government, and even then, fair elections would not be held again until the year 1990. 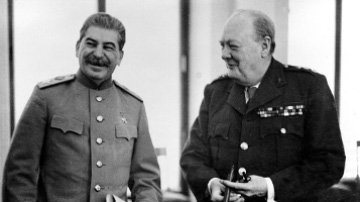 “From Stettin in the Baltic, to Trieste in the Adriatic, an iron curtain has descended across the continent.”

Winston Churchill had hoped to see a Europe free to determine its own destiny in his lifetime—a hope that Adolf Hitler would delay, and that Joseph Stalin would dash. Worse still, on February 9, 1946, Stalin would proclaim in a speech that war between the East and West was inevitable.

In the face of an increasingly polarized post-war Europe, Winston Churchill was offered the opportunity to speak at Westminster College to an American audience; an opportunity he would seize upon. Amid preparing his address to this small-town school, on February 22, 1946, George F. Kennan, the American ambassador to Moscow, would send the so-called “Long Telegram” to Washington. Detailed within it was that the Soviet position was one of perpetual hostility towards the capitalist world, and that the policy of the United States should be one working towards the containment of communism.

When Winston Churchill delivered his address, entitled “Sinews of Peace,” it contained many points; but perhaps the poignant of them were his call for a special relationship to be formed between the United States and Great Britain, and his declaration that an iron curtain had descended across Europe, dividing East from West. 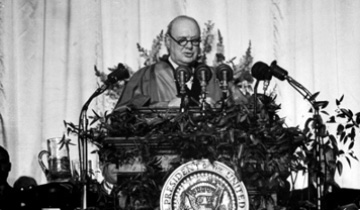 The legacy of Winston Churchill’s speech is hard to overstate. From it emerged the policy of containment of communism that the United States would adopt during the Cold War, the close relationship between the United States and Great Britain, and also the acknowledgement of the importance of international organizations such as the United Nations, which is still a global force for peace to this day. 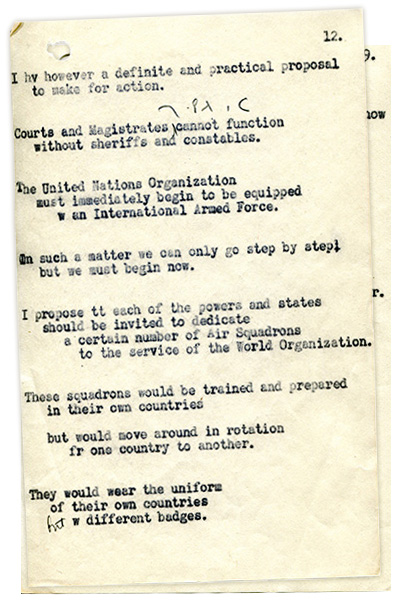 In a final round of edits, one day before Winston Churchill traveled with President Truman to Westminster College by train, he added near the end of his speech: “There is the solution which I respectfully offer to you in this Address to which I have given the title ‘The Sinews of Peace.’”


Page 12 - In order to make the UN stronger and more equipped to keep the peace between countries, Churchill suggests creating a robust armed force for the organization. 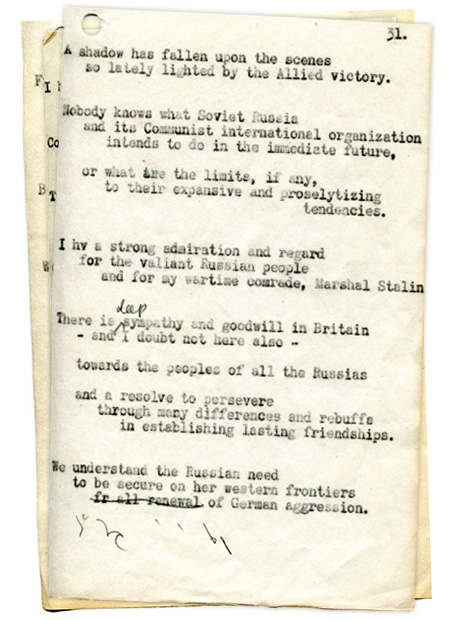 A sinew is defined either anatomically, as the tendons or ligaments linking together our bones and muscles, or more ambiguously, as what binds together and strengthens the parts of a whole. For Churchill, the sinews of peace became a powerful metaphor for strengthening the UN, with the “special relationship” between Great Britain and the United States providing the strongest, most integral bond.

Although Churchill suggested we strengthen the UN militarily as a precautionary response to the actions of authoritarian governments like the Soviet Union, he wasn’t advocating for war.

On Page 31 - Churchill brings up then-current issues with the Soviet Union and his desire to respond to them amicably.

Ultimately, Churchill wrote this speech promoting the sinews of peace in order to halt further war so as to engender the growth of peace and prosperity for the future.

On Page 50, Churchill reiterates his suggestions for the strengthening of the sinews of peace and the relationships they represent. 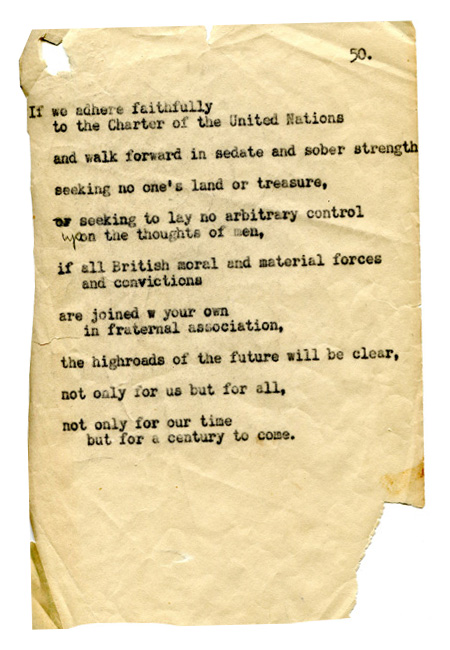 Referring to the term Churchill coined to describe the polarization of East and West, this speech is commonly known as the “Iron Curtain” address. In the speech, Churchill asserted that Western liberal democracies represented mankind’s best hope against tyranny. Insisting that people of all nations ought to be able to choose their own governmental system, he called on the United States and Great Britain to be the principal champions of democracy and, therefore, global progress and human dignity.

Churchill cautioned that the Soviet Union stood as the antithesis of these values and was the primary threat to future peace and liberty. He warned that the democratic processes in the nations of Eastern Europe had already been destroyed by the vice grip of Moscow and, as a result, the people trapped behind the “Iron Curtain” were suffering. This was not the first time that Churchill expressed a distaste for communism as throughout his political career he had warned of its existential threat to human progress.

In his speech, he extolled Western nations to be proactive in their efforts to prevent the further expansion of communism, predominantly through close cooperation between the U.S. and British Commonwealth.

Acknowledging the recent sacrifices that had defeated totalitarian foes in Europe and Asia, Churchill understood that victory would be short-lived if similar attention were not devoted to this new looming threat. With Europe so sharply divided between communist and democratic states, he feared that similar ideological divisions might expand, foreshadowing the emergence of the bi-polar world which became a key feature of the Cold War. 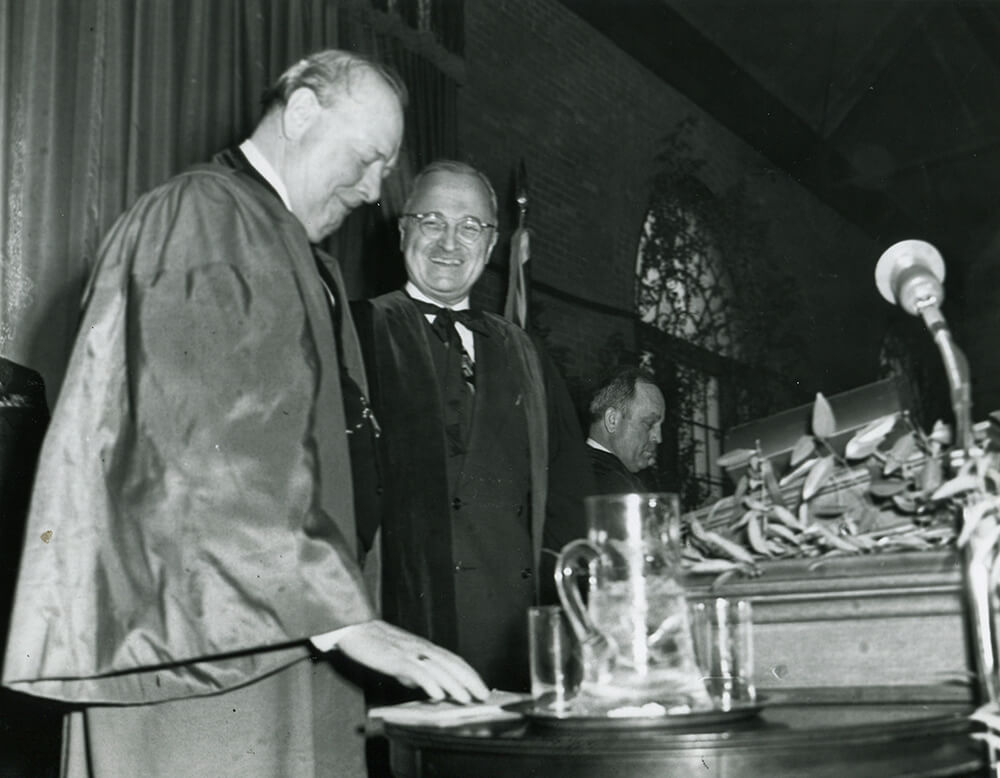 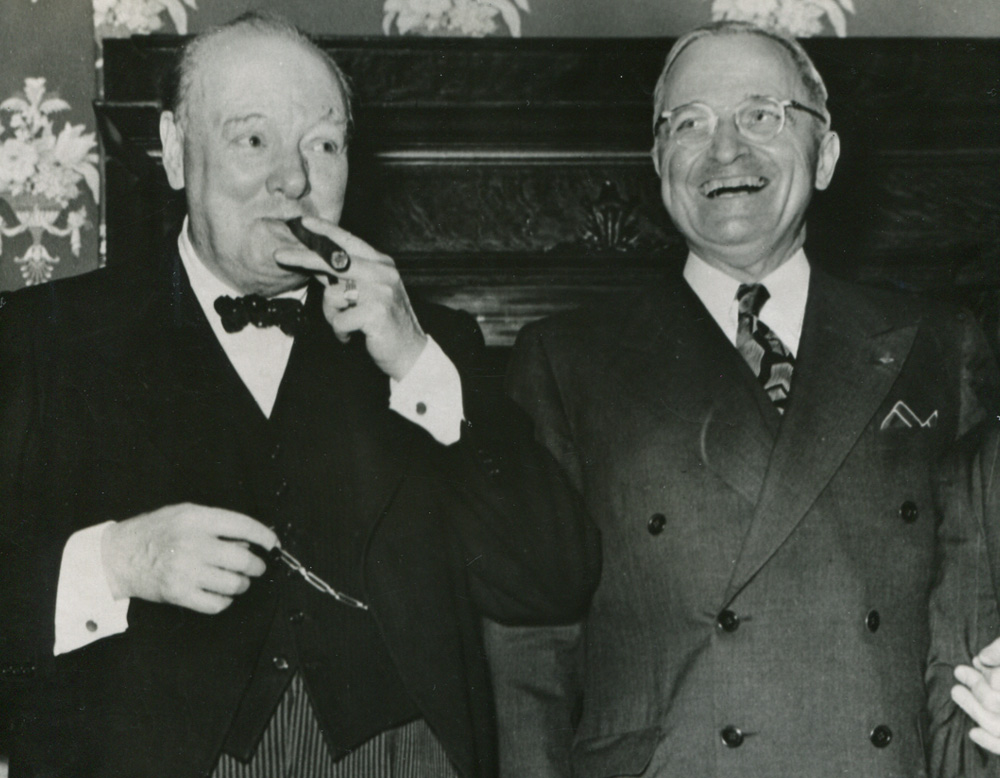 While the term “iron curtain” is perhaps the most famous phrase from “Sinews of Peace,” Churchill also coined another phrase that remains popular today—special relationship. He used it deliberately, leaving no doubt about its meaning: “This is no time for generalities, and I will venture to be precise.” For Churchill, the special relationship was rooted in a military alliance between two nations that shared a common language and together upheld the virtues of democracy.

“Fraternal association requires not only the growing friendship and mutual understanding between our two vast but kindred systems of society, but the continuance of the intimate relationship between our military advisers, leading to common study of potential dangers, the similarity of weapons and manuals of instructions, and to the interchange of officers and cadets at technical colleges.”

Churchill surmised that perhaps even common citizenship would define the bond between the two nations.

Today, the alliance between the United States and the United Kingdom transcends military cooperation. It incorporates trade, security, scientific exchange, and the term is widely employed in government and diplomatic circles on both sides of the Atlantic.

Global Security, The United Nations, and the Sinews of Peace Speech

Most everyone could see the need for global security upon the conclusion of the Second World War. With so many dead, and so much destroyed, the only wish of many of the afflicted peoples was that such a conflict would never happen again—a wish that the United Nations Organization (UN or UNO) would seek to answer. Conceived in 1945, the UN was the spiritual successor to the League of Nations, an international organization that had held the same aspirations, but had failed to uphold them.

The League of Nations had been the brainchild of American President Woodrow Wilson, who had designed it in response to the First World War. Due to several factors, however—not least of which being the United States’ failure to join and the initial exclusion of countries such as Germany and the Soviet Union—it ultimately fell through and was unable to prevent such conflicts as the Sino-Japanese Wars, the Italo-Ethiopian War, and ultimately, the Second World War.

Winston Churchill was able to pinpoint the core reasons why the League of Nations failed. It had not been a bad idea; rather, it had been a good idea poorly executed. In “The Sinews of Peace,” Churchill insinuated that the UN would be much more successful than the League of Nations with the United States as one of its members. Invoking the spirit of the Atlantic Charter, he also called for a special relationship between the United States and Great Britain. Churchill advocated for this new international organization to have the ability to enforce the decrees it might make by it having a military force all its own. Crucially, he argued that no nation should be outcast from it, but instead, all should be included so that every nation, no matter their ideology, would have a voice in international affairs. In this way, Churchill hoped that global security could, and would finally become a reality. 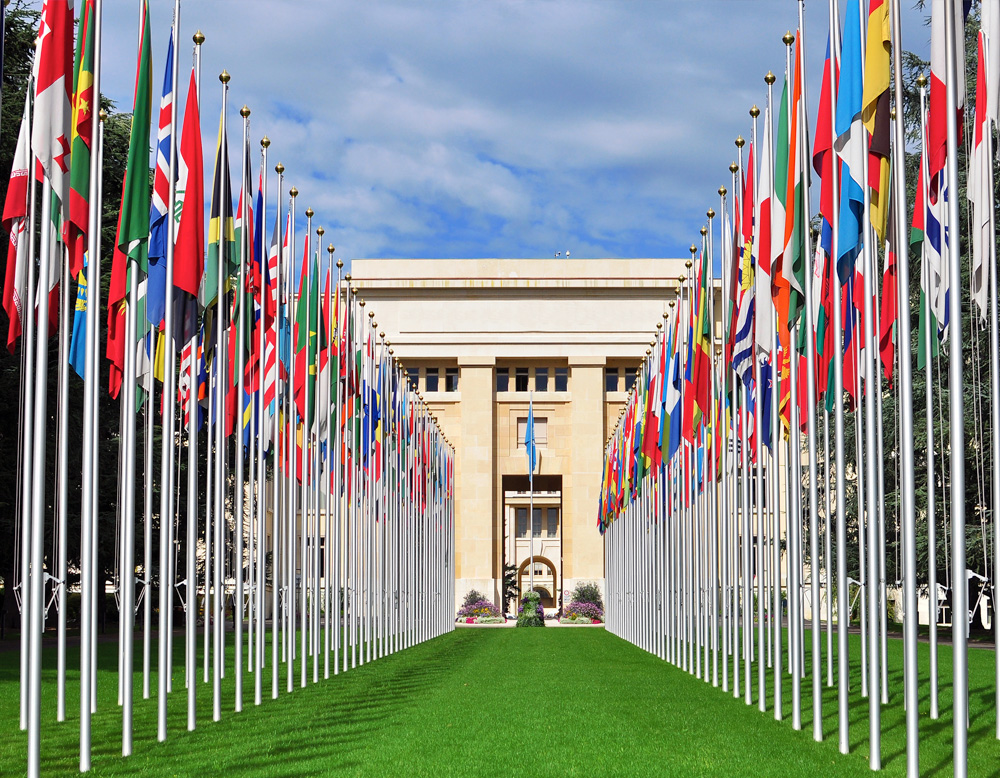 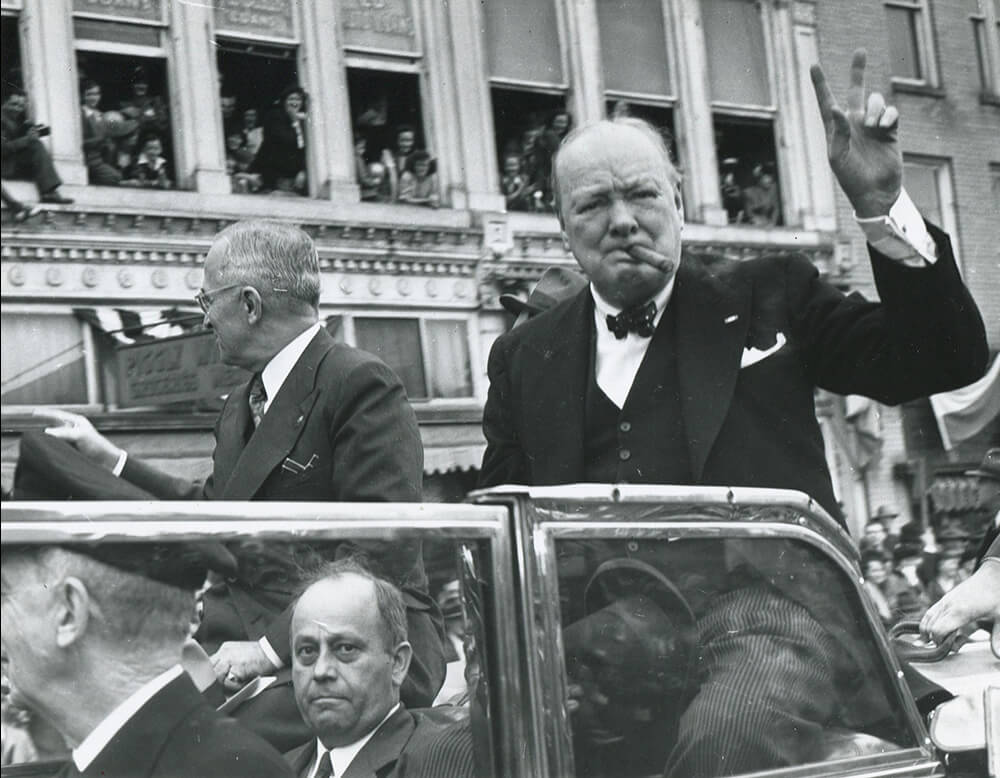 Churchill had begun formulating the key arguments of the “Sinews of Peace” address, such as the fraternal association of the English-speaking peoples and the Soviet iron curtain, as early as 1943. Yet he continued to polish the speech between poker games with President Truman on the train en route to Fulton, dictating as Secretary Jo Sturdee took down revisions in shorthand. This original carbon copy draft was given privately to a British Embassy staff member for press communication. It was later purchased by the editors of Life magazine, who gifted it to Westminster College in 1952.

The near-final version of Churchill’s address reveals around 80 annotations that reflect his final rhetorical changes and flourishes. Many of his modifications personalize the speech by inserting phrases such as “I feel” and “in my belief” to subtly remind the audience of his experience in world politics, strengthening his argument. Churchill also made small edits to enhance the rhythm of the speech or better utilize rhetorical devices such as repetition.

Churchill was one of the few politicians who crafted his own speeches. His life-long study of the English language – both written and spoken – allowed him to fully capture the themes and passion he wished to convey and acutely tailor them to a specific audience and circumstance. The unique stanza format Churchill used to craft his speeches reflects his dynamic delivery style of dramatic pacing and impactful pauses. Churchill won the 1953 Nobel Prize in Literature “for his mastery of historical and biographical description as well as for brilliant oratory in defending exalted human values.”